SEX WORKERS will be given sex robots and virtual reality sex toys to ensure they are “top of the market”, experts have revealed.

Brothels and escort agencies will “invest” in sex robots and create scenes plucked straight from an episode of dystopian telly hit Westworld, an academic researching the UK sex industry claimed. 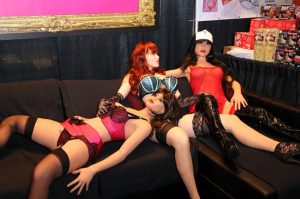 High-end escorts are likely to invest in emerging sex tech, according to the experts

Eleanor Hancock, is working with dozens of sex workers and escort agencies in the north-west of England as part of a study, revealed that “sex workers will completely adopt new sex technology coming out”.

“Why would a sex worker not jump on this technology?”

It’s likely that flush escort agencies will pay for sex robots or teledildonic sex toys that are expected to fetch up to £12,000 when they are released on the market.

It’s likely that flush escort agencies will pay for sex robots that are expected to fetch up to £12,000 when they hit the market along with high-tech sex toys like remotely controlled teledildos.

But rather than take over brothels, the robots will work alongside the prostitutes so it can “learn”, Hancock added.

But it also means cheating partners are more likely to “get away with it,” computer expert Dr Lynne Hall said during the the Love and Sex with Robots conference at Goldsmith’s University, London on Tuesday.

She revealed: “There are obvious benefits to this if the sex provides the required arousal and experience whilst avoiding potential dangers of intimate engagement, such as disease or unpleasant encounters, and of course some of the social consequences of getting ‘caught’.”

Virtual reality and teledildonics will be a massive contributor, she added.

Take, for example, Pornhubs’s Twerking Butt, which includes a VR headset, sex toy and a range of sexual encounters to simulate.