SCIENTISTS are creating robot heads that let you virtually kiss someone anywhere in the world and even smell their saliva. 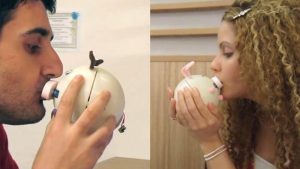 They will work using software from Kissenger, which is the world’s first mobile kiss messenger.

The mobile app has been around for a while and allows two people to get intimate on the web using mouthpieces connected to your phone.

Kinky long-distancers who want their Facetiming or Skyping to get a bit steamy simply put their lips on the device.

It works by sensing the lip pressure of the user and send it in real time to their partner’s mobile phone which will make their own plastic lip pad move in time.

But now the developers are creating silicon heads which work in a similar way, so there’s no need for your girlfriend to ever be around.

You can put your partners body odour or perfume in the device so you can smell while you smooch too.

It is hoped it will also let you snog virtual characters and sex robots.

So if you’ve ever had a crush on Lara Croft, a virtual smooch could be on the cards in the very near future.

The incredible development was revealed at the second Love and Sex Robot conference at Goldsmith’s University on Monday.

Emma Yann Zhang, who is working on the development said: “We want to make a robotic head with silicon to make a fully kissable robot using the same technology as the mobile phone version.

“We’ll embed control sensors in the robot’s head instead.”