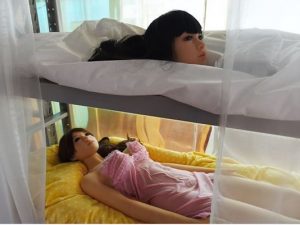 There’s a new fleet of robots that may make you blush.

Sex bots are not just limited to science fiction films, love service robots are under discussion for human pleasure.

The Second International Congress on Love and Sex with Robots is happening Dec. 19 to Dec. 20 at Goldsmiths, University of London. The event gives the academic community a chance to present ideas and innovative work on human relationships with artificial partners.

This year, there are about 100 people in attendance including tech writers, sex writers, journalists, scientists and humanities scholars.

The event features sessions on topics such as intelligent electronic sex hardware, gender approaches to robots, and teledildonics, or internet-connected sex toys.

The congress aims to peer-review material that explores the relationships between human and robots on an intimate level, which involves human emotions and feelings such as love and sex.

However, humans having sex with robots could potentially break up some marriages.

A Swiss researcher at the event warned an audience about the possibility of robots being better at sex than real people, prompting humans to have less sex with one another, according to Gizmodo.

But the researcher also said robots don’t tire out like humans, so an intimate encounter with a robot may be physically exhausting to a human partner.

A sex bot could potentially be capable of collecting very intimate data from its human partner. Having that knowledge mean a robot could store information about people and use it for seduction, according to the researcher.

It could be quite some time before sex bots become a household item, but there are entrepreneurs already working to make money off the love robots.

A 15-minute session and a cafe americano would set a customer back €60 or about $62.