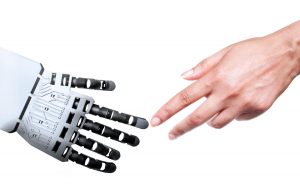 Sex robots appear to be here to stay. This Monday and Tuesday, the Second International Congress on Love and Sex with Robots is drawing some of the best minds in artificial intelligence, robotics AND computer-human interaction to London, in the latest evidence that the industry is no longer in its infancy.You can already buy high-end robotic love for about seven grand — and they come ready-made with a beating heart, the capacity to orgasm and even multiple, programmable personalities.“Does love have to be reciprocated in order to be valid?” asks Dr. Kate Devlin, event host for the London conference. Much to her delight, she knows that our culture has already answered her question.The vision of sex celebrated by our movies and music — and facilitated by hook-up applications like Tinder — is premised on lack of feelings and commitment. The whole point is to use each other as mere objects. The rise of digital pornography (and, soon, mainstream virtual reality porn) is also premised on sexual gratification apart from there being any reciprocation.Sex with computers is just the latest example of this trajectory.But barring any changes in our sexual culture, the game-changing nature of robotics and artificial intelligence gives many people good reason to believe that it will eventually replace having sex with humans.

Don’t believe me? Think we’ll at least need sex between humans to propagate the species?

The answer to this challenge was offered two decades ago by the movie “GATTACA.” It warned of us of a culture in reproduction is consciously separated from sex.

In its world, that human beings of the not-too-distant future will reproduce almost totally via laboratory technology. In the movie, people who had “religious births” (created because their parents had sex) were known as “invalids.”

In a striking scene, a geneticist working with a couple noted that, “You have specified hazel eyes, dark hair and fair skin. I’ve taken the liberty of eradicating any potentially prejudicial conditions. Premature baldness, myopia . . . alcoholism and addictive susceptibility . . . propensity for violence, obesity, etc.”

When the couple asks if they “should leave a few things to chance,” the geneticist replies, “We want to give your child the best possible start. Believe me, we have enough imperfection built in already. Your child doesn’t need any more additional burdens.”

We aren’t there yet, but as in vitrofertilization (IVF) has become less expensive and more effective — and as we continue to put off child rearing until later in life and demand genetic quality control over our offspring — reproduction will become more and more disconnected from sex.

Particularly when we have artificial placentas (not that far away) and artificial wombs (pretty far away, but coming), we will be dangerously close to proving that sci-fi scenario correct.

Anyone who has ever been through IVF knows the ways in which we can attempt to have quality control over the embryos for sale. From paying Ivy League college students $20,000 for their eggs (as long as, of course, they provide evidence of their high SAT scores and a photo demonstrating their attractiveness) — to using preimplantation genetic diagnosis of embryos to choose “the best” embryos (and discarding the rest) — we have set a reproductive course directly toward the future “GATTACA” warned us about.

If we are to stop the slide we will need a progressive sexual counter-culture.

In resisting such forces, we must stand up for new cultural norms which insist that sex and openness to the gift of procreation (not the market-laden term “reproduction”) must be connected.

Arguments in favor of such connections need not rely on the Bible or any kind of explicitly religious truth, but simply on the view that a culture ruled by the norms and principles in “GATTACA” are bad and ought to be resisted. Plenty of people hold this position regardless of their (lack of) religious belief.

The current culture, of course, finds it difficult to insist on the connection between sex and the gift of procreation. Indeed, disconnection between the two may be so strongly imbedded in the developed West that it may require young people to get us rethink our sexual and reproductive practices. In addition to being far more open-minded about these matters, the dystopian future toward which we are slouching will be theirs to live through if nothing changes.

It will take a very strong sexual counter-culture to get a culture dominated by capitalism and sexual autonomy to rethink these norms. But young people have changed embedded assumptions in our culture before.

Of the next generation, we must ask the following question: “Are you going to accept your grandfather’s view of sex and reproduction, or is your generation going to challenge the status quo?”

If we are to avoid “GATTACA,” we must hope for the latter.

Camosy is associate professor of ethics in Fordham’s theology department.