A London university is hosting world experts on loving and having sex with robots this week.

The two-day conference, which has been banned in Malaysia, will address the ethics around sexual relationships with robots and includes a talk on ‘teledildonics’ called Teletongues – lollipop devices for remote oral interaction.

She told the Standard: “It may be have a controversial or trivial-sounding topic title, but this is an academic conference area with a lot of growth and development.

“Sex technology is a huge industry worth billions of dollars worldwide. Humanoid sex robots are more niche, they are only manufactured in the US and Japan at the moment. 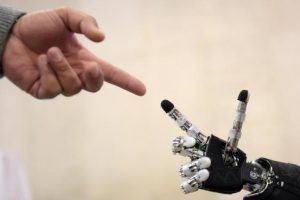 Humans and robots: A two-day conference will look into the ethics of having sexual relations between the two. (AFP/Getty Images)

“There are several important things to consider with these robots. Is it ethical to make machines to have sex with? At the moment there is not much interactivity with sex robots, they are just sex dolls, they are not sentient. But with artificial intelligence, in the future we will be able to create robots that think for themselves.

“Another thing to consider is who collects the data from the robots? Will we have privacy? Even vibrators are starting to collect data.”

Having relationships with robotic technology became a topic of debate after the release of Scarlett Johansson film ‘Her’ in 2013,  a romantic sci-fi drama whose main character falls in love with his female intelligent computer operating system.

Dr Devlin added: “We need to fully understand the ethics and therapeutic uses of sex with robots and where it’s going in a diverse and equal manner.

“A lot of technology now is being created by men and for men but they are just mechanised sex dolls, the stereotypical seductive woman – though the market for sex toys is evenly split between men and women.  Why can’t we explore new forms of sex robot and less heteronormative ones?

“Also, these robots could help people who cannot normally form relationships and provide them with a form of intimacy they would not otherwise have.”