A new book by City’s Professor of Pervasive Computing, Professor Adrian Cheok, probes the ubiquitous and exponential impact of the internet and digital connectedness on modern society.
Friday, 22nd May, 2015 • by John Stevenson

Professor Cheok, who is also the Director of the Imagineering Institute in Iskandar, Malaysia, has worked extensively and with distinction over the last two decades in the fields of augmented and mixed reality, pervasive and ubiquitous computing, entertainment computing, fuzzy and embedded systems. In recent years his work has centred on developing a variety of applications in the realm of the multisensory internet exploring digital taste, smell and touch actuation with devices such as the RingU and the Scentee.

His new book brings together a cluster of perspectives on the rapid developments in internet connectivity which have given rise to profound change at technological, social, political and economic levels. The chapters range across many areas which have felt the impact of the brave new world of hyperconnectedness: the 2008 United States Presidential Primary Race; the notion of a virtual collective consciousness mobilised during the Arab Spring of 2011; the concept of an ethically digital world; large-scale multiplayer pervasive games; digital materiality and augmented reality. These are a few of the topics dealt with in Hyperconnectivity and the Future of Internet Communication.

In the following Q&A, Professor Cheok responds to questions about hyperconnectivity, virtual collective consciousness and the multisensory internet.

John Stevenson: What is hyperconnectivity?

Professor Adrian Cheok: Hyperconnectivity refers not only to the technology that enables communication and interaction, but also to the impact that this technology has on personal lives, business, government and societal behaviour. Hyperconnectivity results from a combination of the wider availability of broadband internet expansion, the exponential growth in proliferation of mobile and wearable computing devices and high speed wireless internet access.It includes the dominance of social media and consumer generated media in daily life and recently, the use of the cloud for data and applications access. Hyperconnected communication includes not only human-to-human formats (as individuals and as members of groups and using a vast array of digital media), but also communication between people and machines and between machines and machines without any direct human involvement. 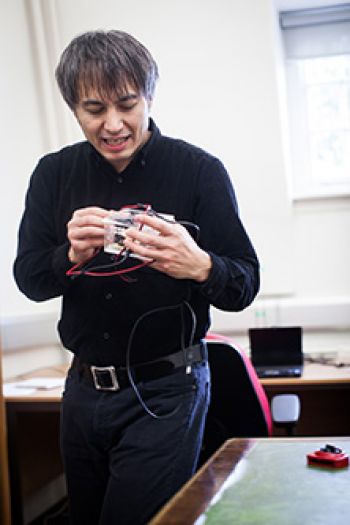 JS: Readers of your book are introduced to the concept of virtual collective consciousness. Can you explain what this means to you? PAC: The idea of a global (collective) virtual consciousness is a bottom-up process and a rather emergent property resulting from a momentum of complex interactions taking place in social networks. This kind of collective behaviour (or intelligence) results from a collision between a physical world and a virtual world and can have a real impact in our life by driving collective action. The sudden fall of long-lasting dictatorships in countries like Tunisia, Egypt, Yemen, and Libya was accomplished with a new type of revolutionary ammunition: social media. The collective behaviour exhibited during the Arab Spring uprisings was enormously facilitated and accelerated by Web 2.0 mass communication tools such as Facebook and Twitter. The fast-paced dynamic of the interactions between users involved in the Tunisian and subsequently, the Egyptian cyberspaces, was motivated by the time-independent, non-physical mobilisation of people.These social networking platforms represent a new milestone of the globalization process and certainly a new and promising venue for collective opinion sharing. E-democracy is, indeed, a compelling example with respect to this kind of societal changes as a new vision of democracy where ordinary citizens can regain control of their decisions by sharing a broad-based social consensus. The latter can enhance citizen empowerment through today’s information technologies (IT) and give rise to what is now known as leaderless revolutions. JS: How close are we to having commercially available digital taste and smell? PAC: To pursue the next stage of the internet, humans should not only communicate emotions with visual, audio and tactile stimuli but also with smell and taste. Humans will want to share these stimuli collectively and experience them digitally as they currently do with the visual and audio media on the internet.

To start off, we have developed an electrical tongue actuator stimulation device. The initial experimental results suggest that sourness and saltiness are the main sensations that can be evoked alongside the evidence of several sweet and bitter sensations. More importantly our next prototype will generate sweet sensations using thermal stimulation. We expect this research to culminate with a wearable unit that can be clipped inside the mouth. Users can wear this unit in daily lifestyle situations for augmentation. I believe we will be able to have digital taste as a commercial product on the market within the next two to three years. We will be performing a detailed fMRI study to compare the proximity of digital taste generation to corresponding chemical tastes.

Digital smell is still more at the concept and experimental level at the moment. We are developing a technology to electromagnetically stimulate the user recipient’s olfactory bulb or brain for the purpose of generating smell. This device will be smaller in size where the person could have it in an upper area of the mouth, beneath the palatine bone, triggering the smell-sensitive neurons in the brain. It may take a few years to develop this technology. It could take another five to ten years to see a digital smell product on the market. Our research will also open up a multitude of new horizons and opportunities for future research including areas such as human computer interfaces, entertainment systems, medicine and wellness. The digital controllability of taste and smell sensation provides a useful platform for engineers, interaction designers, and media artists to develop multisensory interactions remotely, including the generation of new virtual tastes and smells for entertainment systems. For scholarly research, this would help bring about answers to exactly what is the language of taste and smell.