Only the lonely: Expert believes humans will marry robots by 2050 IBTimes UK

Some fear robots are coming for our jobs, others think they’re going to take over the world, but one expert believes they’ll more likely be taking our hands in marriage as he predicts humans will wed their robot lovers by 2050.

Author of ‘Love and Sex with Robots’, Dr David Levy, revealed that with the advancements in robotics and artificial intelligence the sight of a humanoid taking conjugal steps will be commonplace within the next 35 years.

“The first marriage will be before, not after 2050,” Dr Levy said during his speech at a robot conference in London.

Dr Levy believes that tying the knot with the Terminator will be such an integral part of modern life that marriages will have to be recognised by law to make a humanoid nuptials as legitimate as our old-fashioned human vowels.

“As more and more people come to accept the concept of love and sex with robots, society will come to develop laws to govern human-robot relationships,” the academic believes. “We’re being forced to contemplate what human-robot relationships will be like a generation or two from now…as love and sex with robots becomes more commonplace, we should face the very real possibility of marriage with robots.” 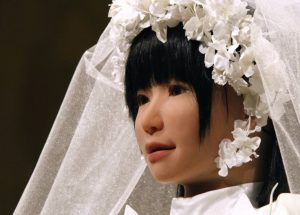 And what would our robot bridge and grooms be like? Rapidly evolving technology will see a completely different landscape for robotics in 35 years. It won’t be like dragging a modified Henry vacuum down the aisle. Dr Levy, who has a background in AI research, described that advanced programming will see robots will have near human-like personalities, while companies are continuing to create life-like bodies to blur the lines of realism. If you needed more convincing he also revealed “robots of the future will not be jealous, boastful, arrogant, rude, self-seeking or easily angered, unless of course you want them to be.”

Will somebody please think of the children

Of course, Dr Levy recognises that the notion will be met with criticism and objection, particularly with the debate of robot romps being hotly thrashed out on the grounds of morality.

Experts have flagged their deep concerns that the rise of sex machines could have a major impact to real-life relationships as robots will fill-in the place of a human by being able to fulfil people’s “basic sexual needs”. They also fear robots could allow people to explore or encourage their “deepest perversions” while giving users unrealistic expectations of sex.

Celebrity-lookalike robots are already being produced with one fan spending £35,000 to build a scarily realistic Scarlett Johansson doppelganger droid that moves and talks, which he believes could open up a market for sex bots.

Experts also fear that the sharing of our personal data could pose a security risk but you won’t have to worry about getting a virus. Well, only the computer kind, at least. 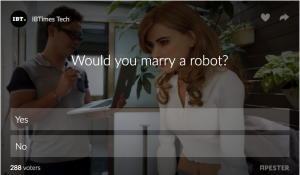